The Calligraphy exhibition is extended! 一筆字展延長開放!

Free entrance and donation is welcome. 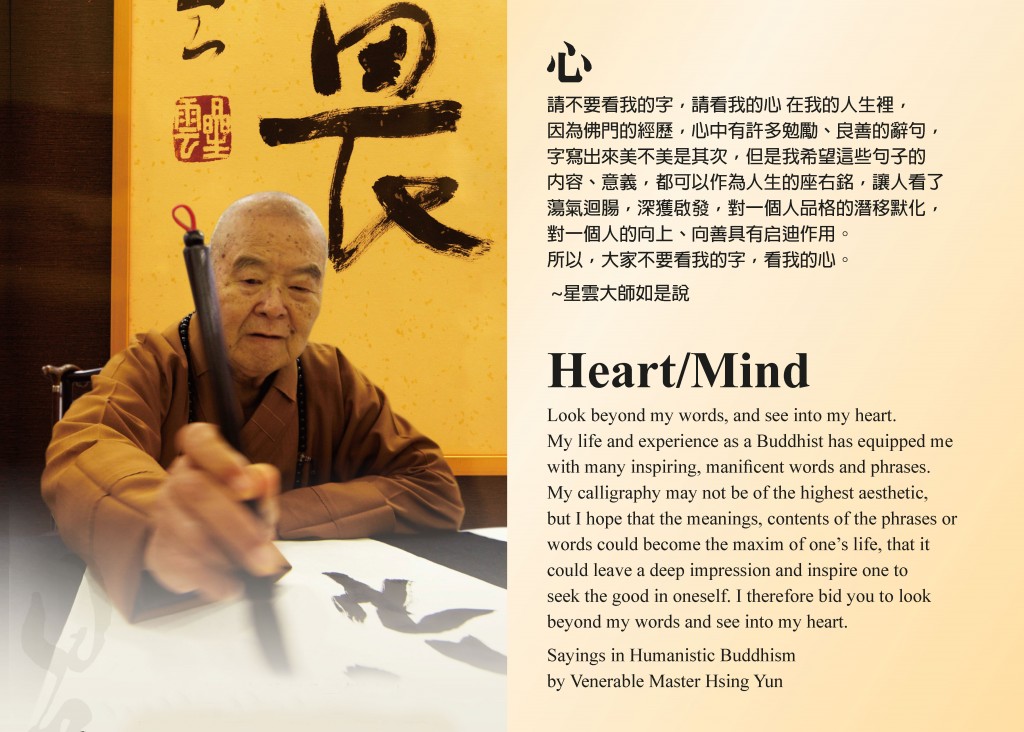 “Everyone is a Buddha!” said Venerable Master Hsing Yun. Putting aside the question of “who is actually a buddha?” it can at least be said that Venerable Master Hsing Yun is a bodhisattva who never tires. Turning 90 years old this year, he has faced 40 years of diabetes that led to a serious eye condition, along with retinal detachment. With unclear visions in both eyes, he can barely see. Despite having to write calligraphy with shaking hands, he still is able to let his heart guide his hands in completing the extremely rare “one-stroke calligraphy.”

“One-stroke calligraphy” means that every piece of calligraphy written by Venerable Master is done in one stroke. No discontinuation is allowed from beginning to end, as any discontinuation will make it difficult to continue to the next character, because his vision does not allow him to distinguish the distance between each character. For this reason, he is forced to complete the whole work in one stroke.

Under such difficult circumstances, Venerable Master still makes efforts to keep his brush moving between ink and paper. Last year, he donated all thirty million NT dollars from the royalty he had received for the books he had written to establish a public benefit trust, entrusting the bank to organize different public welfare activities to benefit society.

This trust fund received support from devotees, and quickly raised almost one hundred million dollars NT. However, in order to continue the fundraising, Venerable Master Hsing Yun makes the one billion NT dollar mark as the new goal. Once again, he exhibits his amazing willpower to keep writing day and night, completing one hundred calligraphy works for this calligraphy charity fundraiser. Among the hundreds of works are “I am a Buddha,” “Auspiciousness and Wishes Fulfilled,” “Transcend All Types of Sufferings,” “Do Not Forget One’s Initial Aspirations,” “Regard the Multitude as You Regard Yourself,” “A Hundred Merits and Auspiciousness.” He will be holding a series of calligraphy charity fundraisers and thereafter, travel to Taiwan, United States, Europe, Hong Kong, China and other countries to create good affinity with the public and Buddhists. Proceeds from the calligraphy charity fundraiser will fund the Public Benefit Trust Fund, which will work hard to promote and purify society.

We wish for all those interested in this joyous activity to come participate.